RAG to clean up marking

Marking and feedback is a perpetual challenge for a teacher. We've done lots of work developing this in my department but a lot of that has been on processes for checkpoint feedback - something that happens once every few weeks. We've come a long way as a department but the ongoing conflict between good marking and the time taken to do it always tugs at the wrong side of the work/life balance

However in a fantastic example of how Twitter can spark ideas and contribute to ongoing CPD I read this post recently (as recommended by Alan Patel in this string of tweets...) 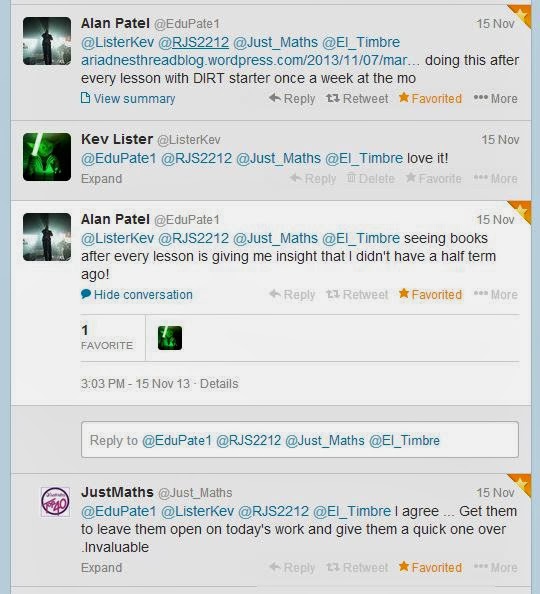 I really liked the colour coded dots idea described in the post - but it didn't feel detailed enough - is amber due to lack of understanding or lack of effort? Then it occurred to me that we already have a marking guide in my department that we use for homeworks. Colours (Red, Amber Green) are used to indicate our view of the effort made, and numbers (1,2,3) are used to indicate accuracy/understanding shown. As such G1 is excellent effort and understanding where R3 is little effort and no understanding. Note it is possible for students to work really hard and not understand (G3), or to fully understand but put no effort in (R1) - these are important distinctions.

A trial was born
For the whole of last week I decided I would mark all books after every lesson using RAG123 codes. The emphasis was on a quick temperature check, perhaps an extra comment/correction here or there. As such a full set of 30 books takes between 10 and 15 minutes.

I'm keen to emphasise that at the start of the week I was not sure if I could sustain this, or if it was worth it. Thoughts like "15 mins per lesson, that's over an hour for 5 lessons worth" kept creeping in - had I bitten off more than I could chew?

However I know many primary colleagues routinely mark everything that their class produces in a day - if it's possible for primary why not for secondary?

I thought is was worth a try to see if it was even remotely possible. I'm a HoD - I teach slightly fewer lessons than the rest of my department - If I can't make it stick I certainly can't suggest the rest of the department try it! (For reference though I tried this in a week that I'm also carrying out our school's lesson observation round - as such many of my PPA periods have been taken up with obs, feedback or paperwork associated with this.

Alongside me @robewilliams79 also tried this, and he teaches a full timetable. He has been just as successful and is just as positive about this.

Once I'd done the first round of RAG123 marking in each book I explained the process to the students and from then on they have been scoring themselves with a RAG123 at the end of each lesson (often with a comment to explain why they have given themselves that rating). I am now just reviewing their self assessment and agreeing/disagreeing as needed - with occasional comments of explanation as appropriate.

Time to do it
I'm surprised to say it's actually quite easy to fit this in to a working week!

Firstly the fact it only takes about 10-15 mins for a full set means that it can be squeezed in at various times of the day. Unlike an extended detailed marking session that might take 1 or 2 hours of concentration this can be done in any 10-15 minute window you find during the day. For example I found myself with a spare 10 minutes before registration on Tuesday so whizzed through my year 9 books. I dashed through my year 11 books in an otherwise unused dead 15 minutes between the end of the school day and a staff briefing. On Friday I rounded off the week by doing 3 sets of books inside 45 minutes (I was interrupted 4 or 5 times during that) - This meant I have zero marking to do this weekend.

I am actually finding that the short, sharp nature of this allows me to make much better use of my PPA time or other fragments of hours that dot around a working week. Also the satisfaction of knowing that all books are 100% up to date is massive.

Quality of feedback
You're probably thinking that RAG123 isn't detailed enough feedback for the students to find useful? However because I've seen their work each day I can react directly with my planning for the next lesson, or with an extra comment or two. For one student who managed to fly under my radar and do almost no work in one lesson (despite outwardly giving the impression of working) I could make sure I gave him some real focus in the next.

Vitally because it's instant it's not about reviewing habits or errors that have compounded over a period of time - it's about responding quickly, with timely interventions to ensure things stay on track.

It also makes a real marking dialogue possible as the students know that you can respond quickly. This is a great example of a dialogue this week as a result of this process... 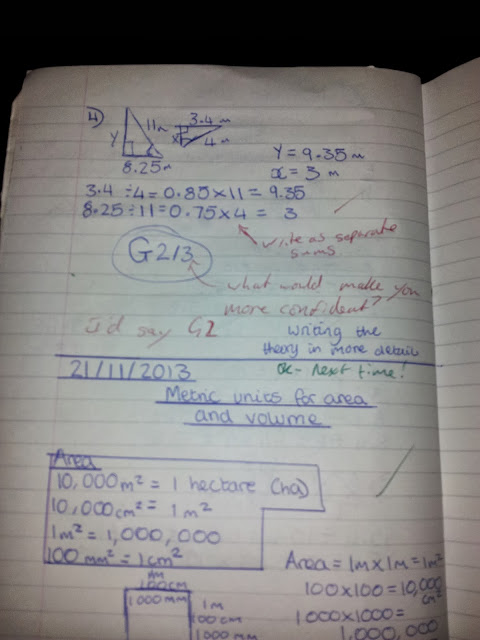 Her initial self assessment of G2/3 - my response and question, her response and my follow up all happened within 24 hours! This is not the only example.

Pupil view
This is simple - they love it! The speed and directness of this simple feedback connects to them really clearly. I've found it's really motivated groups that can be guilty of cruising a bit. When a group of students arrive saying "I'm definitely going to get a green today" and "yeah me too" you know you've made a connection.

One group were being a bit distracted so I reminded them mid lesson that at the end I was going to ask them to RAG123 their work. I just asked them to consider if they felt they would be able to honestly write G or even A if they continued with their current effort level. The final 25 minutes of that lesson saw a marked increase in effort across the class.

Long view
Clearly one week is far from a detailed trial but the benefits seen in that week make me want to keep going and share it further. So far for me the benefits appear to be:

Downsides are relatively few - think it just needs a commitment and a decision to do it. Note I'm not saying that all books have to be marked on the same day as their lesson, just that they should be given a RAG123 before the NEXT lesson with that group - depending on the timetable that could give a few days to find the 10-15 minutes in. Admittedly it may not always be possible to do this after every lesson, but missing the odd lesson is less significant if the pattern is there that most lessons are marked.

Is that all the feedback they get?
No - the plan is still that students continue to get feedback in the form described in this post at least once per half term. This means that in addition to the RAG123 marking I need to find time to do a more detailed mark/feedback once every few weeks - but as I'll have seen the books regularly I already know this will be quicker as I'll already have a much better view of the progress that each student is making. In addition we already have a departmental approach to feedback from all tests and assessments to give formative guidance from them, which adds to the mix of feedback (described in this post).

Overall view
In case you hadn't spotted I'm sold on this - for the first time ever I'm actually enthused by marking - it's become both interesting, worthwhile and relevant. It's moved from something I had to do to something that I want to do. It also makes me reflect on my lessons more effectively as I can instantly get an accurate view of what they actually did as opposed to what I thought they did, and I can link it more closely to the decisions I made during the lesson.

Right now I actually don't see a downside to this - bizarrely marking more often is not more work, it just sounds like it!

As always all comments welcome... add them here or use the #RAG123 hastag in twitter.